Sorry it’s been so long without an email, I don’t feel too badly though, because I haven’t heard from your girlies either! Well, via email, I’ve seen lots of you in real life (imagine that) and we’ve spoken lots via all forms of iPhone communication.

So. I don’t know how to start on this because I’m not usually one for sappy lovey doveyness, but ladies, I’M ENGAGED! Algebra popped the question over Spring Break (yep, I love my job, I have a spring break and am getting dangerously near to a big summer break).

We’ve tentatively set a date for December 29th of this year which means I am currently under 8 months away from THE DAY. I’m doing my best to not become one of those girls where they get engaged and then the wedding planning consumes all forms of life and it’s all they talk about (but I realize I’m already failing). I’ve tried to set a few rules for myself.

1- Stop staring at my engagement ring when other people can see me. (I NEVER wear finger jewelry at all and this damn thing is pretty shiny. It’s a hazard while driving.)
2-Do NOT bring up wedding plans (unless there is a DIRE emergency and opinions are needed) unless someone else brings it up first.
3-Never say the word fiancé. Sorry girls, Algebra is still my boyfriend and he will be until he’s my husband. Fiancé sounds stupid coming out of my mouth (unless I’m in Vegas pretending to be French).

With under 8 months to go, it’s likely that I’ll be breaking my rule #2 (like I am right now) on a fairly consistent basis. Le sigh.

Wedding planning emergency #1: WHERE THE HELL DO I START? Any guidance anyone can give me in this region will be gratefully accepted. Bianca, thanks so much for signing up for all the wedding newsletters for me.

Since I am a self proclaimed nerd, the first thing I did was claim the URL bridgetandalgebra.com and start a wedding website (just for the basic information and so I don’t have to take any paper RSVP’s, I mean, I drive a Prius, my wedding will have as little impact on the environment as possible). Sure, I don’t have any information to put up on the website, but it exists and I’ve done something for the wedding and that’s all that matters to me. Any progress counts, right?

Note: While I’m engaged and even after the wedding I still plan on having girl’s night more than once a week and going out just like we do now. If I stop getting invited to the bar or themed house parties, I will give new meaning to bridezilla. Got it, betches?

Trying to dodge the sappy and refusing to even look at wedding dresses until I drop 10 pounds,
Bridget

PS-When do I need to order one of those dresses by, anyway? Eph.

Word to Tuesday my friends. In unexpected news Algebra bought me a puppy for part of my Christmas gift. The little bugger’s name is Wiener. Yes, he is a mini dachshund (I had to google it to spell it correctly). And yes, he is completely running my life. Ladies, I’m being controlled by a 2.3 pound pup, but he’s just cute enough that I’m okay with it – for the next few weeks anyway. 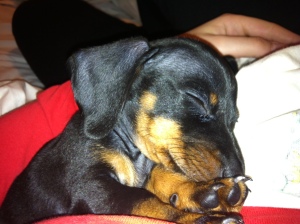 In Santa’s little bag of goodies it looks like there is a heap of dramatic communication from all fronts. And team, it isn’t even Christmas Eve yet. I’ve received emails, texts, phone calls and smoke signals telling me how disappointed everyone is with me or someone and how I should deal with it (“Deal with it” See: Drink suggestion above).

– Oh, you’re not going to make it out before Christmas? I guess that’s okay. (Dude, Christmas is in four days and correction, you’ll see me Christmas eve.)

– Algebra got you a puppy? Isn’t that what married people do? (What, anus? No. I don’t know what married people do, but I’m pretty sure single people have gotten puppy gifts before. Ps: Jealous no one bought you something to pee on your carpet and bite your toes with razor-sharp teeth? I’m sorry.)

– Cool. I guess we’ll see you on Christmas. (Not if you keep up that attitude.)

– Great seeing you, you look a lot skinnier than a few Christmases ago. (Seriously?)

– What? You don’t want to stay the night in a new place with a new puppy? But you promised weeks ago. (You want puppy pee on your carpet? Cool, we’ll sleep over.)

– Guess what {delinquent cousin} did! Don’t you think you can talk to them about it? (Family gossip. Just say no.)

– Has Algebra wrapped a string around your finger for measurements? (Ew. No. And who does that anyway?)

{Sigh.} One good thing about getting older is that I have to be present for only the family drama that I choose to (and that’s a present in itself). Also, knowing that Christmas always ends with a trip to Piper Down for “therapy” with friends makes it all worth it.

Looking forward to Christmas after all,
Bridget

Wisconsin man shoots TV over Bristol making it to the finals of Dancing with the Stars and how mama bear’s conservative supporters are beating the  DWTS voting system. It pissed us off, too. – CBSNews & Jezebel

In other Palin news, Willow (age 16) is a crazy racist jerk. Attacks classmates via Facebook. (We wonder where she gets it from…her home life? No, never!) – Huffington Post

Video interview of Will and Kate’s engagement. She is gorgeous, he’s adorable. We love that deep voice of his. – MSNBC

Another Willow’s [Smith] hit “Whip My Hair” is such a sensation even Neil Young (played by Jimmy Fallon) and Bruce Springsteen are doing their own rendition.  –Rolling Stone

Someone who makes fun of Mormos better than we do, who knew? – Seriously Oblessed

Filed under Links we <3

“You had me at boloney sandwich”

Good morning to you both, I hope you’re having excellent mornings.

I know it’s old news, but I have become obsessed with the Kate Middleton and Prince William engagement. I just want to know all about her and how they met and why fate dealt her the winning lottery ticket of life. 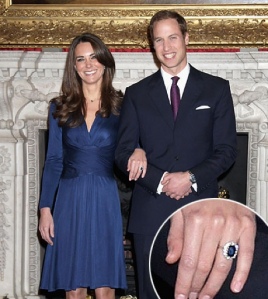 Aw, lovely. Kate and William aren't too bad either.

Strangely though, I’m not jealous of her in the same way I was when Ryan Reynolds (he was voted the sexiest man alive yesterday, FYI) got together with that voluptuous Scarlett Johansson; which is totally ridiculous because she is incredibly gorgeous and a huge step up from Alanis Morissette*. Nothing against the 90’s angst queen, but let’s get real here.

I digress. So yes, Kate is the luckiest girl in all the Kingdom, but I feel like she is qualified to be a princess! If she isn’t the classiest most gorgeous girl in the world, I don’t know who is. Also, I love her fashions; she matched her outfit to her engagement ring. They met 100 years ago much like Preston and I. Although under different circumstances, of course (we had way less paparazzi than they did).

I first met Preston at a sorority event when their house came over to see a hypnotist/comedian. He got hypnotized and made a complete fool out of himself, but for me it was love at first sight. His reputation preceded him so I knew he was dating the president of the goody-two-shoes sorority, but I still had a big crush. Since he was taken, I flirted with one of his cute frat brothers, Peter (as in Peter-Pass-Around since all the DramaWhores have had their turn). This flirting led to more and I ended up dating Peter for a while.

Peter invited me to go to their Fraternity’s annual Lake trip which usually consisted of binge drinking, wake boarding and seriously dangerous (read: binge drinking) cliff jumping. I enthusiastically obliged. Unfortunately for Peter, my crush on Preston materialized on this trip. Their drunk friends ate all of my food, and Preston was nice enough to make me a sandwich from his own stash, where I learned that we liked the same cheese, and both had Invisalign retainers.

Later that summer I learned that Preston and his goody-two-shoes sorority president girlfriend had broken up. I knew this was my chance. I initiated the phase out with Peter, planned my big 20th birthday bash, and made sure to invite their entire fraternity (a sure way to make sure Preston showed up without actually having to personally invite him). He didn’t show and I ended up making out with my ex baseball boyfriend before passing out on the bathroom floor.

Preston had no idea how I felt about him, and I wasn’t about to tell him, so I chalked it up to it not being meant to be.

Then Monday rolled around and I ran in to him on campus making pancakes for student government. I built up the courage to go say hi and he was surprisingly excited to see me. He gave his friends their penis shaped pancakes and asked if I had any interest in coming to their School Girl party that weekend, and I said yes (duh, I am catholic).

I showed up with all of my friends in tiny skirts and tied up shirts, found some liquid courage (of the “jungle juice” everclear-roofie variety) and planted a kiss on Preston next to the beer pong table. I then ran away. (My naivety back then proved to work in my favor more than one would imagine.) I was stumbling in to the sorority house when I got a text from him that read: “I’ve had a thing for you ever since I made you that sandwich on the lake.”

Soon after that we fell in love. ❤

So yeah, Preston and I are pretty much just like Kate and William, minus a few tiny details. Our future engagement might not get as much publicity, but whatever.

Nothing says love quite like Beer Pong and Pancake Dongs,
Bianca.

*Did you know that You Oughta Know is about Uncle Joey (Dave Coulier)?! Seriously!